Momsanto is Mom's floating genetic-engineering facility. It floats because if it were on the surface its experiments would be illegal.

In 3013, Leela climbed a beanstalk in front of Planet Express, which ended up collapsing under its own weight, and she discovered the facility. [7ACV22] Mom's sons captured her, and she was locked in a tower, where she gave a D.N.A. sample. After being rescued by Fry and Bender, she attempted to stop Mom by crashing the facility into New New York, but was not successful.

Creatures in the facility

Mom is also planning to breed a giant cat to drag things in.

Thanks to Leela's D.N.A. sample, the beanstalks started to have suction cups to keep them from collapsing. This unlocked a cheap, abundant source of nutrition for the world's starving masses, which should make Mom a much richer woman. As a reward, Mom cured Leela of her squidification.

Momsanto was first seen at the turn of the month May/June 2013, in a piece of concept art and in a promotional picture, both released by Countdown to Futurama. [1] [2] 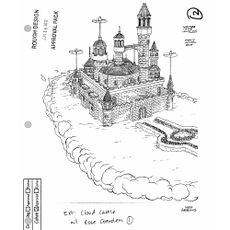 Concept art of Momsanto, released by Countdown to Futurama, in May 2013. [1]

Leela: It's some kinda deluxe apartment in the sky!

Leela: I'm not an animal! I'm a mutant being. And I demand to know where I am.
Igner: There.
[Igner points at the Momsanto logo.]