From The Infosphere, the Futurama Wiki
Revision as of 12:05, 3 October 2010 by Aki (talk | contribs) (Created page with "left|150px<noinclude>Category:Feature Blurbs</noinclude> '''New New York''' is a major city in the United States and the primary setting of ''[[Futu...")
(diff) ← Older revision | Latest revision (diff) | Newer revision → (diff)
Jump to navigation Jump to search 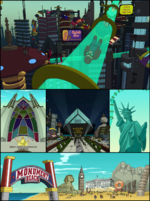