The Femputer is a fembot disguised as a femputer so she can rule the Amazonians. She came from a planet ruled by a chauvinistic manputer that was actually a manbot. Whenever men come to her planet she punishes them although she fell in love with Bender when he discovered who she really was. She later attended the 100th Delivery Party. (6ACV12) 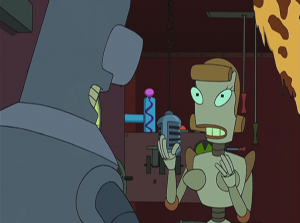 Femputer: Have you any idea how it feels to be a Fembot living in a Manbot's Manputer's world?
Bender: What?