From The Infosphere, the Futurama Wiki
Jump to navigation Jump to search
The printable version is no longer supported and may have rendering errors. Please update your browser bookmarks and please use the default browser print function instead.

The City Zoo is a zoo on the planet of the primates. In 3013, Guenter took Bender, Zoidberg, and Amy there, where they discovered that Fry and Leela, who thought that they were on a romantic holiday, were secretly caged up in a human habitat. The four then went to talk to the zoo director — Dr Banjo. A week later, Fry and Leela were taken home on their automated shuttle.

Casa Isolada Eco Resort is the front for the zoo's human habitat. It has a pool and a bar. It uses pairs of robot hands as employees.

Humans have been vacationing in the habitat for years. Leela was previously there with her old boyfriend Sean.

When Sean returned to the resort, with his wife — Darlene —, the zoo quickly invited Leela back, as a behavioural experiment, keeping Sean and Darlene there under the pretext of shuttle repairs. The human exhibit had never been so popular, and the zoo even went as far as selling Fry wigs.

The City Zoo was first seen in a preview clip for broadcast season 10, in February 2013. It was also featured in a promotional picture and in a preview clip for 7ACV17, both released by Countdown to Futurama, in May [1] and June, [2] respectively, and was mentioned in an interview of David X. Cohen by the magazine Popular Mechanics, published in May. [3] 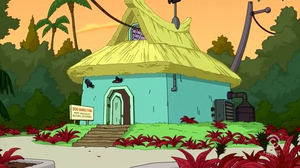 Guenter: Unlike your Earth zoos, our zoo is a model of compassionate encagement. The animals don't even know they're in captivity. [Four gazelles run into an invisible wall.] See? 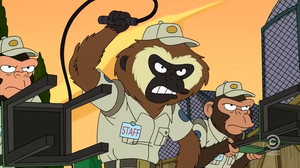 Members of the staff.