The Trisolians are a species whose bodies are made from a water-like substance. They rest in bottles, jars, or bowls like the bottle that Fry drank containing the Emperor. The Trisolians usually are naked however the rich or famous Trisolians dress in clothes even if its just a hat. The guards carry pikes as weapons. When the three suns set the Trisolians glow in the night.

Trisolians are ruled by a single monarch, the Emperor of Trisol. The Trisolian monarchy is unique in the fact that every emperor ascends to power by assassinating (drinking) the previous one. The average life of a Trisolian Emperor is one week, due to the fact that they are almost immediately killed, sometimes at their own coronation. 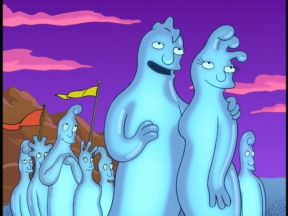 Trisolians in their nocturnal Phase.

Bont: I'm the Emperor, thanks for crying me out.

Gorgak: You touched me in ways I've never been touched before.