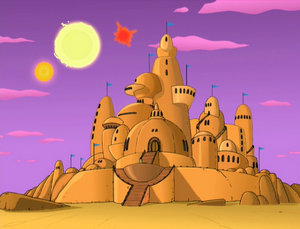 The politics of Trisol are quite simple, the High Priest helps the Emperor rule the planet, while the Prime Minister runs the planet.

The Emperor is the all powerful ruler of Trisol. The Emperor becomes Emperor by assassinating the previous Emperor, but is then likely only to rule for one week, before being assassinated themselves. At the Emperor's coronation, they have to flawlessly recite the Royal Oath, and, upon failure, they are instantly executed. They have the power to appoint the Prime Minister.

Fry briefly ruled as Emperor of Trisol, after unwittingly drinking the previous Emperor Bont whilst delivering a package to the palace. Fry's reign is cut short however, after it is revealed that Emperor Bont is still alive in Fry's belly. The Trisolians attempt to rescue their original Emperor by killing Fry in a giant juicer. Luckily however the Planet Express crew is able to extract Emperor Bont by making Fry cry him out before the Trisolians can storm the throne room. Bont is then reinstated as Emperor, and Fry and his companions are presumably pardoned.