It should. Unfortunately, this article have been given very little attention, which sort of puzzles me, as I assumed many people liked this character. But indeed, it should have sections, it should have a far better structure entirely. Hence the templates at the top. --Svip 21:51, 15 November 2009 (UTC)

I've thought this for a long long time, but I keep forgetting to mention it: Is it just me or is the trivia section bloated and full of crap that barely qualifies as trivia? I mean, it's indeed trivial, but I'm not sure it's the same thing. --Buddy 13:34, 27 March 2007 (PDT)

Who is this I see?

Has this person been on any episode of Futurama? 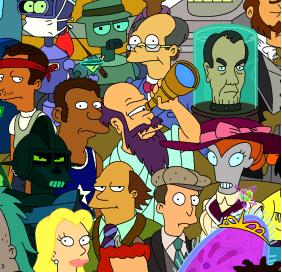 (Center) (Full Picture here)
If not, maybe there is something else going on, something interesting... Chris of the Futurama 22:50, 1 February 2009 (UTC)

Have you not seen A Bicyclops Built for Two? In the flashback, a Cyclops is seen looking through toward the sky spotting the missiles coming toward their planet. It is an old character. --SvipTalk 23:45, 1 February 2009 (UTC)

In "Fear Of A Bot Planet", Leela appears to be a passionate New New York Yankees fan. I'm not sure she has any real attachment to the Mets aside from having been briefly employed by them. Unless she's one of those NNY poseurs who roots for both teams. Cy3 15:20, 2 May 2009 (UTC)

Her reference to the Mets sucking is pretty much a baseball joke from our time. I don't care anything about baseball, personally, but I know this joke and not from Futurama. But in no way is it implied on the show that she roots for the Mets, she was just employed by them. So she can still be a Yankees fan while having being employed by the Mets. But I think this is a bit of a small thing to let it slide. --SvipTalk 16:31, 2 May 2009 (UTC)

In light of what happened in ITWGY (as in, the final minute), I thought it'd a good idea to add the fact (to both the initial and Bio sections) that things between Leela and Fry have changed and are likely to change further, seeing as she's admitted she loves him - notwithstanding the potential threat of the Dreaded Reset Button. Obviously, time will tell as to what the relationship is, if there is a relationship, whether they move in together, etc., but in the meantime, I figured it'd be nice to add a litle expansion material. Thank you, and I hoped that I passed the audition. :) -- the preceding unsigned comment was written by THM.

Personally, I feel that this article needs a good comb-over, it seriously needs a good update. I am talking rewrite update. The opening part is far too long, there should be a character description, a character history, a character creation (you know, behind the scenes kind-a-thing), more trivia stuff, as well as details such as families and other relevant lists.
The ITWGY ... events should also be covered in the Fry-Leela relationship, which should deal with this very relationship in far more detail than Fry's and Leela's articles.
And lastly, welcome onboard (just remember to sign your posts). --SvipTalk 23:07, 26 June 2009 (UTC)

Message received and understood! :) I definitely agree that the fallout from ITWGY should appear in the Leela/Fry section, though as for a total rewrite of the Leela article...uh, can I get back you on that? ;)--THM 23:42, 26 June 2009 (UTC)

you should add her short lived career as an eco-femnista

Her elbow talons, are they like the ones on the Neechians(sp?) from Gene Roddenberry's Andromeda?

First off, my apologies for my mistake with Leela's birthdate. I read it as the 24th. Four and nine look the same, right?

Well, I actually think that Leela just turned 35 in "The Late Philip J. Fry", not 34. According to her, she was 25 during the events of "Brannigan, Begin Again", and that episode most likely occurred after July, as they do spend what seems to be a Labor-Day weekend on the beach in "When Aliens Attack". Twenty-five plus ten years makes her 35. Can I get a unanimous agreement? --Frida Waterfall 06:33, 31 July 2010 (CEST)

I agree.She should 34,or at the very latest 35.Plus, since when do cartoon characters age? If they did, Bart from the simpsons would've been an adult! Yes,please change it, What about Fry?

Something should be mentioned about the arm device she wears all the time and the fact that she never takes it off, even when in bed, as evidenced by the latest episode.

yes that's exactly what I meam, but it should be mentioned on here somewhere, especially the fact that it's only been off of her when it revolted with the rest of the robots