From The Infosphere, the Futurama Wiki
Jump to: navigation, search
Steve Castle

The "Steve Castle" article has been labelled the following levels:

I personally think this article should be moved to Steve Castle, and the redirect left in place. If we're going to redirect from "common names" to "proper names" it might be appropriate... Any thoughts? --Buddy 14:33, 23 May 2007 (PDT) 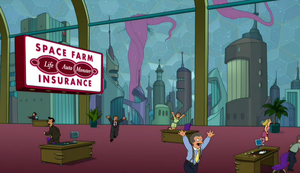 I've spotted Steve Castle running during Yivo's first meeting with Earth. He was working for (or is a client of) Space Farm Insurance.

What gives?-- the preceding unsigned comment was written by Mini-Me.

Perhaps the boneitis merely put him in a coma that would have lead to death, except one of the doctors instead simply cured the disease and he was fine. - Quolnok 19:03, 13 June 2008 (PDT)

Recent edits have been trying to change the used name for the character from Steve Castle to That Guy.

Personally, I assert that we should keep it "Steve Castle" as it is his name -- according to script (and it also looks prettier than "That Guy"). We usually tend to keep ourself factual on this wiki, even if not the popular name for a character. --Svip 22:43, 28 October 2009 (UTC)