According to Professor Farnsworth, the Svalbard Global Seed Vault, located on Svalbard outside of Norway, Earth, and guarded by a Norwegian man, has preserved seeds of every known plant species, in case of extinction, since 2008 (6ACV13). The Planet Express crew visited it in order to get pine tree seeds, which had been contaminated by germs from the nearby Germ Warfare Repository, during Xmas 3010. 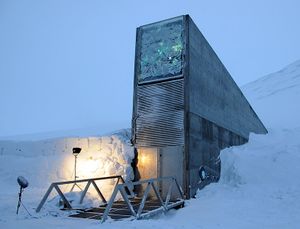 The actual Global Seed Vault in the 21st century.

The Svalbard Global Seed Vault is an actual backup seed vault that opened in 2008. It is used as a backup in case other seed vaults are destroyed or contaminated, for example by rise of sea level due to global warming - Svalbard is relatively safe from this.