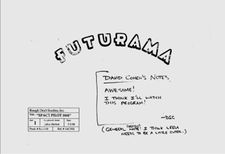 The first page from the storyboard for "Space Pilot 3000".

A storyboard is a graphic organizer such as a series of images displayed in sequence for the purpose of pre-visualizing an animated sequence, meant for "in production" use, and generally not shown publicly.

However, a few storyboards have appeared on DVDs and, often partially, on Countdown to Futurama, an Internet countdown conducted by Comedy Central Insider, Comedy Central's news site, that releases promotional material for new episodes.