Reckless Ted's Funland was an amusement park located in New Jersey and open during the 20th century. The park featured usual carnival fair but was ultimately closed when a large amount of visitors contracted salmonella from the Flume ride.

In the 30th century, Robot Hell is located within the Inferno attraction and can be accessed via a secret passage. 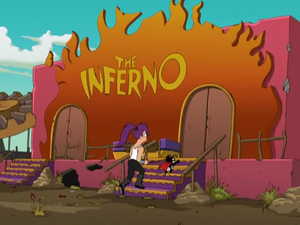 The entrance to Robot Hell