Peoples α is the planet of gangs, thugs, and hustlers. It is controlled by two rival gangs — the blips and the cruds. A lot of ships get stolen there.

In 3013, the crew went to Peoples α to deliver a crate to the blips. [7ACV21] The crate, which contained guns, was a gift from the cruds, who sent it as a sign of trust, so that, together, the two gangs could rid their streets of the real enemy — giant spiders. However, because Bender had bent the guns, both a group of blips and a group of cruds accidentally shot themselves.

During the delivery, Bender stayed with the ship, to prevent it from being stolen, and all of his body parts except for his eyes and his mouth were stolen.

Peoples α was first seen in a preview clip for broadcast season 10, in February 2013. [1] It was also featured in a promotional picture released by Countdown to Futurama, in May. [2] 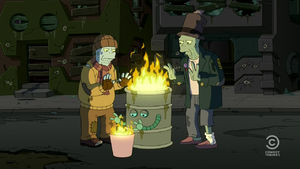 Two aliens warming up around a barrel robot.