Nerdlinger is a word sometimes used to describe a fan of Futurama, or sometimes a geek in general. The term originally appeared in an episode of The Simpsons, and has later been used by both the Futurama crew to describe their fans, and by the fans to describe themselves. 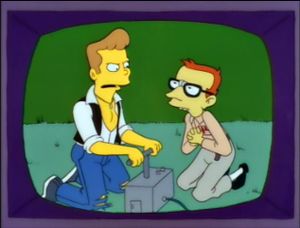 The Simpsons character "Nerdlinger" on the right.

The term first appeared in 1993 in The Simpsons episode "Homer Goes to College", written by Conan O'Brien. After being told he has to go back to college, Homer Simpson watches the college film School of Hard Knockers to prepare for campus life. In the film, the jock character Corey is planning a prank with the character Nerdlinger. Nerdlinger is a stereotypical nerd character, which includes wearing pocket protector, glasses, and high-water trousers. Corey yell at him "Your Bra Bomb better work, Nerdlinger!"[1]

A text in AL1 written by executive producer David X. Cohen is included after the standard legal warning on Disc 4 of Volume 4. In it, he discusses how sad a "nerdlinger" is who has no life and instead translates Alien language, but he also thanks the nerdlingers for being their "biggest fans", and admits that most of the Futurama crew as well are nerdlingers. Translated to English, it reads:

THIS DVD INCLUDES A SPECIALLY ENCODED EASTER EGG WHICH YOU ARE NOW METICULOUSLY TRANSLATING FROM AN ALIEN LANGUAGE BECAUSE YOU HAVE NO LIFE AND ARE A COMPULSIVE NERDLINGER. HOW SAD. IT IS ESPECIALLY SAD IF YOU DON'T SPEAK ENGLISH AND YOU HAVE TO TRANSLATE THE ALIEN LANGUAGE INTO ENGLISH AND THEN INTO YOUR OWN TONGUE AND YOU COME UPON A WORD LIKE NERDLINGER WHICH REALLY ISN'T A WORD AT ALL, BUT STILL APTLY DESCRIBES SOMEONE WHO WOULD TRANSLATE SUCH A WORD. TWICE. AND THOSE OF YOU WHO ARE READING THIS ON A FUTURAMA NEWSGROUP AREN'T ANY BETTER, WE LURK ON THOSE NEWSGROUPS AND WE KNOW WHAT NERDLINGERS YOU GUYS ARE, TOO. OF COURSE, YOU'RE ALSO PROBABLY OUR BIGGEST FANS. WHICH IS SAD IN ITS OWN WAY. BUT, SINCE YOU WENT THROUGH ALL THIS TROUBLE TO TRANSLATE AN EASTER EGG, WE DO OWE YOU SOMETHING. SO HERE'S A SECRET ABOUT THE SHOW: THE WRITERS, PRODUCERS, DIRECTORS AND MOST OF THE ACTORS WHO WORKED ON THE SHOW ARE ALL NERDLINGERS, TOO.[2]