Murg was the High Priest of Trisol under the Emperor Bont, and ostensibly held his position when Fry rose to power following Bont. He gave Fry advice about becoming the new emperor, such as suggesting that Fry appoint a new Prime Minister, introducing him to the Royal Consort, and of the required flawless recitation of the royal oath at the Coronation Ceremony. After it is revealed that Bont survived, Murg immediately turns on Fry, ordering his death so Bont can live freely. 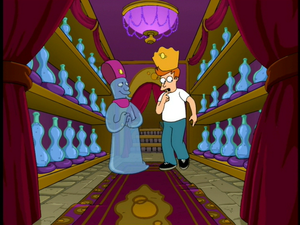 Murg introduces Fry to one of the perks of Tristolian royalty: His Majesty's harem