Mr. Peppy is a bone vampire, who was Fry's pet for a brief period in 3011. Fry discovered him as a fertile egg at the Local Group Farmers Market, which he decided to nurse until it hatched. When Mr. Peppy eventually hatched, the crew discovered that it was a bone vampire, an alien known to suck out the bones of creatures, leaving the flesh behind. As it was clear that Mr. Peppy was dangerous and, further, could reproduce asexually, the crew decided it would be best to release the creature back into the wild. Though he was fond of Fry, he despised Bender.

On his species' planet of origin, the crew discover that the bone vampires have been hunted to extinction by the local farmers whose livestock they have almost wiped out. After an unsuccessful attempt to kill Mr. Peppy, the locals realise that due to their current overpopulation of livestock, Mr. Peppy might instead be useful to them and thus his life is spared. 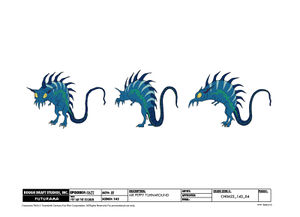 On 30 May, 2011, Countdown to Futurama released concept art of the character.[1]