From The Infosphere, the Futurama Wiki
(Redirected from Jesus)
Jump to navigation Jump to search

Order of the Binary Singularity

See Order of the Binary Singularity.

Is a minor robot religion in Chapek 9 that worships call (Creatrix) Mom the founder of Order of the Binary Singularity. 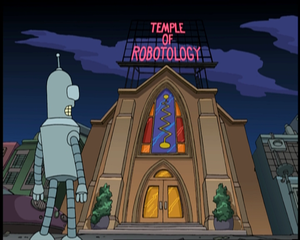 A religion whose members are exclusively robots, Robotology has many customs. Sinners will be collected by the Robot Devil to spend eternity in Robot Hell, New Jersey. The religious text of Robotology is The Good Book 3.0.

Presumably a successor religion to Judaism. Little is known about the relations of Robot Judaism with other religions, but it is known that adherents of Robot Judaism believe that Robot Jesus was built and a very well programmed Robot, but not the Messiah. Followers are known to keep some level of kosher. Shellfish and pork may not be consumed (an anthropomophic pig and Zoidberg were denied entrance to a "Bot-Mitzvah"), though it is unknown if there are other dietary laws besides those mentioned. Keeping with Jewish practice, young Robots go through a rite of passage, which, instead of being called a "Bar" or "Bat Mitzvah", is the aptly named "Bot-Mitzvah".

Vodou, the only non-fictional religion to appear in Futurama, has become a mainstream religion by the 31st century. This may have something to do with the increased number of zombies and may have been brought on by the birth of Zombie Jesus or popularized by the Chanukah Zombie. This religion originally started in West Africa and has spread throughout the world.

The Order of the Binary Singularity seem to worship Mom as their creator deity and refer to her as the "Creatrix". They have her image engraved in their temple's stained glass windows.

Info: Zombie Jesus appears to be a zombie version of Jesus who exists separate from the original and seems to have a very different and odd origin. He has not been seen in the series, but is often mentioned by The Professor. He is featured in The Story of Xmas in the comics. Unlike the original, he seems to have been born as a zombie, with the birth having taken place in the future and at his birth a fembot and an alien octopus were present.
Quote - Fry: I feel like I was mauled by Jesus.
Mentioned: 2ACV12; 2ACV13; 4ACV04; 6ACV21; US#006; Radiorama
See also: Category:Zombies 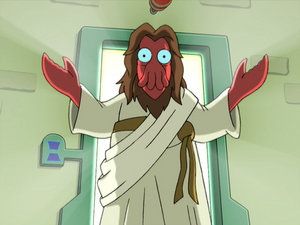 Info: The standard Christian version of Jesus exists alongside (but separate from) the zombie and robot versions. People in the future know enough about him that they recognize Zoidberg's Jesus costume as such (and don't call him "Zombie Jesus"). The second coming of Jesus apparently took place in 2443 and for some unknown reason several video tapes were destroyed during the event. It is unclear what role the figure of Regular Jesus plays in modern religion, such as Space Catholicism and the First Amalgamated Church.
Quote - Zoidberg (as Jesus): [Running away] I help those who help themselves!
Appeared: 1ACV12, 3ACV03, 4ACV04, BG, 6ACV05, 7ACV20; SABF16 (mentioned in speech only)
See also: Category:Prophets 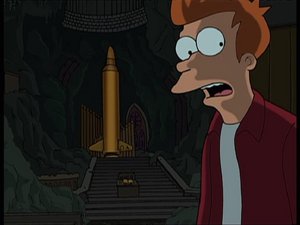 Info: Apparently the central icon of religion in the sewers, and an obvious reference to Beneath the Planet of the Apes. Its followers are rather lax in their beliefs and mainly only worship on certain religious holidays (Christmas and Easter).
Quote Fry: Wow, you guys worship an unexploded nuclear bomb? Vyolet: It's mainly a christmas and easter thing.
Appeared: 2ACV01