The Bart Simpson creatures are a group of creatures that were created after, in 2014, [SABF16] Disputed canon Bart Simpson placed a sandwich that he blew his nose on in a time capsule together with his friend Milhouse's lucky rabbit's foot and radioactive ooze came in contact with them. At first a group of rabbits, they later underwent metamorphosis, turning into Bart-like lizards, and some posteriorly evolved wings.

The creatures, who were multiplying out of control and destroying New New York (putting the price of starter condos at 99 quadrillion dollars), had Bart's father Homer's D.N.A., so the crew went back in time from 3014 to Springfield to kill Homer before they could evolve from him, but instead teamed up with the Simpsons and scientist Professor Frink. The moon was also closed for renovations.

Getting rid of the creatures

The team quickly discovered that the human D.N.A. in the Bart Simpson creatures had only been half Homer's and that the other half had come from Bart's mother Marge. In order not to kill Homer or Marge, they initially planned to kill the one of the Simpson children that had sired the creatures, who they eventually learned was Bart, but instead decided to dig up the time capsule. However, the creatures destroyed the generator that powered the portal that the crew had used to go back in time, causing them to be sucked back into the future before they could do so.

By promising them Butterfinger bars and tormenting them with the holophonor sounds of a unicorn, a rainbow, flowers, and a cat, Bart's sister Lisa rounded up the creatures in Madison Cube Garden, where Hermes locked them, and the Planet Express ship then shot it into space (like they do to each year's Super Bowl losers, who that year had been the Buffalo Bills). The creatures landed on Omicron Persei 8, where they caused more destruction. The city was rebuilt and the generator was repaired, allowing the Simpsons to return to the past. 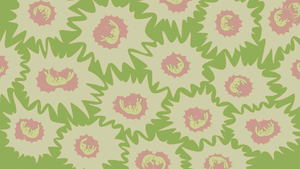 The professor: The only way to handle the creatures is to do what we do to each year's Super Bowl losers — shoot them into space. But we'd have to round them up first.
Lisa Simpson: Let *me* take care of that. If there's one thing I know how to do, it's manipulate Barts.

[Leela, Lisa Simpson, Zoidberg, Amy, and Hermes cheer.]
Bart Simpson: You realize you're cheering the death of millions of my children.
[They cheer harder.]

Lrrr: Look at this mess.
Ndnd: It would've disintegrated upon entry, if someone hadn't turned off the atmosphere last night.
Lrrr: I like it cold when I'm sleeping.
Besides...these horrible Earth creatures are delicious.
[Lrrr eats three Bart Simpson creatures.] 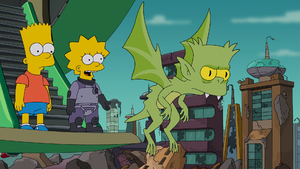 A Bart Simpson creature with wings, in New New York. Also present are Bart and his sister Lisa, who are standing on the Planet Express ship.