Abner Doubledeal is a businessman who generally invests his money in sporting ventures. Doubledeal is first seen as the owner of the Ultimate Robot Fighting League, about a year later he had sold the league and bought the New New York Mets blernsball team. His method of recruiting for both was similar, observing potential competitors in their natural environments; Bender was recruited as a fighter after being spotted in a movie theatre and Leela joined the Mets after pitching for the Planet Express team in the park.

It was announced that Doubledeal would return in a season 6 episode, according to David X. Cohen in a June, 2011 interview.[1] This episode turned out to be "Yo Leela Leela", where he was the producer of Leela's show, Rumbledy-hump. At the end of the episode, he adopted all of the orphans at the Cookieville Minimum-Security Orphanarium to employ them for the production of the reality show version of Leela's show. 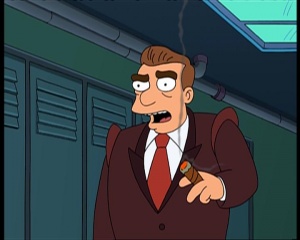 Doubledeal: Son, I'm the commissioner of Ultimate Robot Fighting. I'm a connoisseur of jerks like you who pick fights in movie theatres and you're the biggest I've ever seen.
Bender: You should see me at funerals.

Doubledeal: Kid, that was great! You got us more publicity than a cowboy in a shark tank. Poor Tex... He was quite a shark.