From The Infosphere, the Futurama Wiki
(Redirected from 6ACV01)
Jump to navigation Jump to search

"Rebirth" is the eighty-ninth episode of Futurama, the first of the sixth production season and the first of the seventh broadcast season. It aired on 24 June, 2010, on Comedy Central. After the crash of the Planet Express ship, Fry awakes to find himself and the Professor the only ones left. But luckily, the Professor has a way to give rebirth to the remainder of the crew. 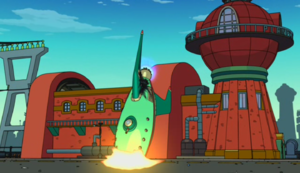 The PE crew dies in a horrid crash.

In the original airing of this episode, the Hypnotoad appears on screen, and Bender's voice announces that people will forget the series was ever cancelled "by idiots" and later revived "by bigger idiots." The scene changes to Fry walking into Professor Farnsworth's laboratory, asking why his hair is frizzy and why he is covered in burns. The Professor explains that when the crew entered a wormhole at the end of Into the Wild Green Yonder, they emerged near Earth through the "Panama Wormhole", Earth's main channel for shipping. Zapp Brannigan, aboard the Nimbus flagship, damages the Planet Express Ship, causing it to crash in a large explosion with the Nimbus outside of the Planet Express headquarters. Professor Farnsworth survives due to his full body "safety sphere device", suffering only "tribial bray dablage", while Fry appears to be undamaged, save for severe burnmarks.

The rest of the crew - not so lucky at all, as revealed to Fry. 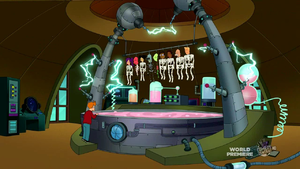 The Professor rebirths the crew with a rebirth machine.

Act I: "Move over God - Prepare for rebirth!"

The Professor revives everyone killed in the crash using adult stem cells (harvested from perfectly healthy adults he killed to get these stem cells) and a birthing machine, except Leela, who enters an irreversible coma. Bender also experiences difficulty during the rebirth. The Professor fits one of his doomsday devices to power him. The device generates excess power, and Bender is forced to continue partying endlessly or else he will explode. 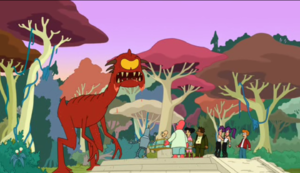 The Cyclophage attacks the crew on Leela's funeral.

Act II: "Can you believe she wore a tank top to my funeral?"

Fry, in his despair over Leela, makes a robot version of her at the Build-A-Bot Workshop. Using recordings made by surveillance cameras all over the Planet Express building, Hermes recreates Leela's personality and memories for the robot. The robot Leela is now horrified to learn of the human Leela's predicament.

As Farnsworth cannot wake the human Leela, she is taken, pursuant to her final wishes, to a planet where she will be eaten by a Cyclops-devouring monster known as the Cyclophage. At the service, Bender's obnoxious partying wakes Leela, who is shocked to see Fry kissing Robot Leela.

Act III: "So that's why I'm so amazed by these things I already knew!"

The Cyclophage approaches, and the crew escapes in the ship. As the ship takes off, the Cyclophage attaches itself to the underside of the ship, unbeknownst to the crew.

Back on Earth, Fry begins to question that either Leela loves him. Leela hears him telling himself that he only loved Robot Leela because she was so much like the real Leela. He also says that he thought Leela loved him, but was wrong as usual. Leela appears to him and convinces him otherwise. Robot Leela sees this, and a fight breaks out between the two Leelas. Fry is handed a gun by Amy and told to shoot one, but accidentally shoots himself, only to expose that he too is a robot.

The Professor then reveals what really happened when the ship crashed. Fry, attempting to shield Leela, was almost completely obliterated by the explosion. The Professor attempted to revive Fry in the birth machine, but this did not have any discernible effect. Leela, in her despair over Fry's death, made a robot version of him and generated his personality for the robot. However, a malfunction caused Leela to receive a severe electric shock, putting her into a coma, and the robot Fry to be badly burned and lost his memory.

At the end of this exposition, Human Fry unexpectedly emerges from the birthing machine, having finally absorbed the stem cells. Robot Fry and Robot Leela declare their love for each other, and leave together, leaving the human Fry and Leela to each other.

Bender decides he is fed up with constant partying and begins to vibrate with the excess energy. The Cyclophage suddenly emerges, and attempts to eat Leela. Bender's severe vibrations cause one of his eyes to fall out, and the Cyclophage swallows him, believing Bender to be a cyclops. The device explodes, killing the creature. Bender emerges intact and the Professor declares that Bender expended his excess energy, making it unnecessary for him to keep partying. The crew leave in order to celebrate, and Zapp Brannigan emerges from the birthing machine with a "wheeee!"

As the first episode of a new run, the production first and foremost focused on continuing from Into the Wild Green Yonder's cliffhanger ending. David X. Cohen explained in an early interview, before the confirmation was even near, that he did consider what to do with the position they ended in, almost daily,[1] which Matt Groening called "painted [themselves] slightly into a corner".[2] While disagreeing on the ease, they were both in agreement that it could and should be resolved in respect with the film.[1][2]

At the San Diego Comic-Con 2009, Matt Groening and David X. Cohen were asked once again about the issue. Matt Groening wanted to ignore it entirely by then, while Cohen stated that they would address it, but only for a single episode.[3]

In a 28 August interview, David X. Cohen revealed that the first episode was tentatively named "Rebirth",[8] and in an October interview, he confirmed it was the title they were using.[9]

On the Animation SuperCon in Florida on 4 October, David X. Cohen along with the male cast, gave a sneak peak of the first three minutes of the first episode's animatic.[10][11]

A full color trailer of this episode first aired during the premiere of Ugly Americans on Comedy Central on 18 March, 2010.[12]

According to the commentaries for the episode, David X. Cohen and Matt Groening had a completely different idea for the return of the show. In it, the crew would appear in another universe, or a distant part of our universe, as a result of passing through the wormhole at the end of Into the Wild Green Yonder. Fry and Leela would wake up in a beautiful paradise of natural beauty, and are just about to start kissing and making out when they realize that they are in a zoo inclosure.

An alien race has captured the crew, and want to breed humans. While Leela is turned off by this and loses interest, Fry is even more turned on by the crowds watching them. The alien race then throws in Zapp Brannigan to have two males fighting over one female. At this point, Matt Groening "very wisely" suggested that the crew would return to Earth, instead, and that the series would pretty much continue where it left off.[13]

The "humans in a zoo" concept was later used in the episode "Fry and Leela's Big Fling".

"Rebirth" aired 24 June, 2010, 10pm EST on Comedy Central followed by "In-A-Gadda-Da-Leela", and, according to Nielsen Ratings, was watched by 2.923 million viewers.[14][15] It received a 1.8/3 household rating and 1.6/5 of adults between 18 and 49.[14] Indeed, the airing of "Rebirth" tied for most adults between 18 and 49 watching television that Thursday evening.[16] Comedy Central went on to comment that it was the highest rated Thursday night that year and the highest Thursday primetime in the history of the network.[16]

As expected, seeing as it was the debut episode, "Rebirth" was the most viewed Futurama episode of broadcast season 7.

"Rebirth" received positive to mixed reviews. IGN's Robert Canning rated it 7.5 (good),[17] and noted that "[w]hile the big laughs may be few, 'Rebirth' still delivers an interesting story using many of the familiar tropes of this amazingly well rounded sci-fi world".[17] IF Magazine's Carl Cortez graded both episodes together a B+,[18] Firefox News' Ariel Ponywether gave it an A+,[15] Paste Magazine gave it 8.0 (commendable)[19] and UGO's Alex Zalben called it "good".[20]

Overall, reviewers agreed that "Rebirth" had issues with its story with issues noted to its pace[21] and being many things at once,[15] but generally felt it was a decent episode. Though, as IGN's Robert Canning noted, they weren't certain if this was the return to the Futurama they "knew and loved".[17]

Themes appearing in this episode include the Fry-Leela relationship, identity, and as usual, injury and death. 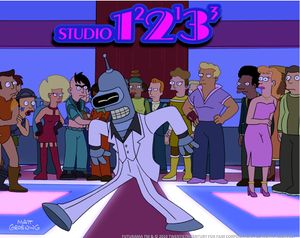 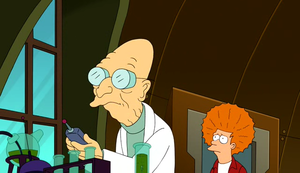 Bender has two eyes after coming out of the Cyclophage.

[The Hypnotoad is shown on screen.]
Bender: [Voice over.] On the count of three, you will awaken feeling refreshed, as if Futurama had never been cancelled by idiots and then brought back by bigger idiots. One... two... [Snaps fingers.]

[First lines of the episode, Fry comes in with his hair in an afro like in "Hell Is Other Robots".]
Fry: Professor, my Fry-fro's all frizzy.
Farnsworth: Okay.
Fry: That's all.

Bender: [Casually, while filing his "nails".] Yeah, we're back.
[Everyone else cheers.]

Farnsworth: Come on, stem cells, work your astounding scientific nonsense!
Fry: Fetal stem cells? Aren't those controversial?
Farnsworth: In your time, yes. But nowadays... shut up! Besides, these are adult stem cells harvested from perfectly healthy adults, whom I killed for their stem cells.

Bender: [Sounding weak and covered in stem-cells.] Aagh, I'm dying... I need mouth-to-ass resuscitation.
Fry: I'm on it.
[Fry moves his head to Bender's ass. Blowing sounds are heard.]
Fry: It's not working.
Bender: [Laughing.] I die happy knowing you fell for that.

Fry: I need cheering up Bender. I dunno... you wanna go party tonight?
Bender: I hate partying. If only I didn't have so much crunk in my ba-dun-ka-dunk!

Leela: There's no room for two captain's butts in this chair!
Robot Leela: There would be if you'd have taken a spin class instead of lounging around in a coma!

The Professor: ...and destroyed both of their short-term memories!
Robot Fry: So that's why I'm so amazed of these things I already knew!

Fry: Poke harder, damn it!
Farnsworth: I'm poking as hard as I can!

Leela: Bender, shut the hell up!
[Bender and everyone but Fry and robot Leela stare in amazement. Bender vibrates with the doomsday device.]
Farnsworth: Bender! Stop shutting the hell up!
Bender: Oh, right. Leela's back, as if I care. Woooo.