From The Infosphere, the Futurama Wiki
(Redirected from 3ACV07)
Jump to: navigation, search 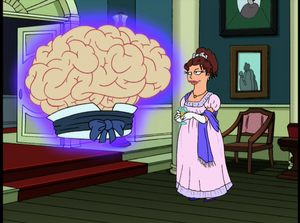 Back at Planet Express, Leela accepts that Nibbler may be dumb, but Fry sticks up for him. The Professor enters with "good news" about the destruction of Tweenis 12. Hermes points out that there have been a string of such planetary destructions, and Fry (with the help of Leela) points out that Earth is next. Nibbler gets anxious and runs away.

Hermes is standing with his mouth open in the shower. Fry turns on the news and finds that the news anchors are acting stupid as well. The PE crew then expresses a desire to play the lottery, buy internet stock (on margin), and join the Reform Party. Fry finally understands that they aren't just acting strange, but have indeed become idiots. 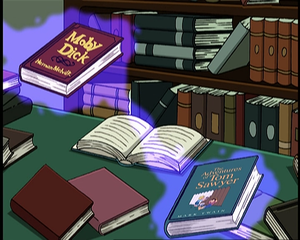 The Nibblonian fleet approaches Earth. It is explained why Fry is immune to the Brain Spawn's attack: Fry's immunity is due to his lack of the Delta brainwave, due to other events which have not happened yet. Leela is sent to instruct Fry to locate and attack the Big Brain, but she cannot be trusted to complete this task, since she'll be affected by the Brain Spawn's stupifaction rays once she lands on Earth. The Nibblonians pin a note to Leela's shirt and send her off.

Fry is attempting to re-educate the PE crew, but even George Washington's head forgets who was the first president of the United States. Leela suddenly crashes through the window, and attempts to communicate with Fry, but she's been turned dumb. She hands him the note, but he misunderstands and blows his nose on it. Then he throws it in the fire, and Leela tries to retrieve it, only to discover that fire is hot. The Professor confirms her conclusion by setting his arm on fire, forcing Fry to use Chester A. Arthur's head to put it out. Fortunately, Leela still vaguely remembers what she's supposed to tell Fry and she tries again to communicate, pointing out the flying brains outside the window. Leela tells Fry to find the biggest brain, and Fry concludes that he might find it at the library.

Fry escapes from the Brain's field, and climbs a bookshelf. He attempts to electrocute the Big Brain with a broken chandelier, but crashes into the wall. A bookshelf then falls on top of him, breaking his neck. Leela tries to help, but Fry dies. The Big Brain laughs in triumph, but the Fry on the floor disappears, revealing that Fry is writing a book of his own. The Big Brain is trapped in this new book (filled with plot holes and spelling errors), in which Fry causes the Big Brain to leave Earth for no reason(raisin)?. The Big Brain falls for the trick, and flies off.

This episode was named #19 on IGN's list of top 25 Futurama episodes.

The Big Brain: What do you want?
Fry: I'm here to kick your ass!
The Big Brain: Wishful thinking! We have long since evolved beyond the need for asses!