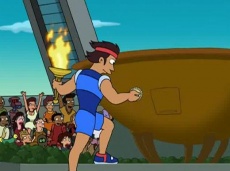 The torch bearer, lighting the cauldron 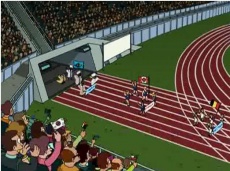 Some of the team competitors

The 3004 Earth Olympiad was an international multi-sport event held in New New York, USA at the Madison Cube Garden. 12 team competitors are known, and only 3 events.

Just like every Olympic games, a man ran with a torch to light a cauldron, though at this olympiad, the bearer opens a hatch in the cauldron and ignites the fire like on a barbecue. After this, the teams walk into the stadium with their flags and banners.