From The Infosphere, the Futurama Wiki
(Redirected from 1959)
Jump to navigation Jump to search 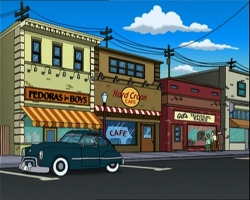 The 20th century is commonly referred as the Stupid Ages, possibly due to its multiple conflicts, such as World War II. However, it was also the beginning of the Space Age. The Moon was first landed on in 1969, and satellites were common in the end of this century.