Difference between revisions of "Transition Announcer"

The Transition Announcer aka the Narrator is an unseen voiceover that occassionaly aids transitions between the scenes of Futurama. Other narrators serve a similar role within the universe for Instructional Movies, The Scary Door and other shows the Planet Express crew watches, these should not be confused as this narrator can not be heard by any of the characters. 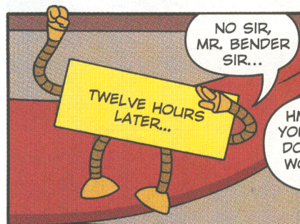 Transition Announcer: You've watched it! You can't unwatch it!

Fry: The other me lived ten years before dying? I wonder what his life was like.
Scruffy: I guess we'll never know.
Zoidberg: Or will we?
Scruffy: [Bites his fingernails.] Nope.
Transition Announcer: They won't know, but you will. Lucky you.

Transition Announcer: Meanwhile, in Universe-A, Hermes-A heads towards the sun... A.

Transition Announcer: And now, back to the Gunderson's Nuts Holiday Spectacular featuring Futurama.