The "Hermes Conrad" article has been labelled the following levels:

featured
This article appeared on the Main Page for Fortnight 20, 2009. This article (or a prior version) has been identified by the Infosphere community as one of the best.
developed-quality
This article is thoroughly developed.
null-focus
No focus level has been assigned. 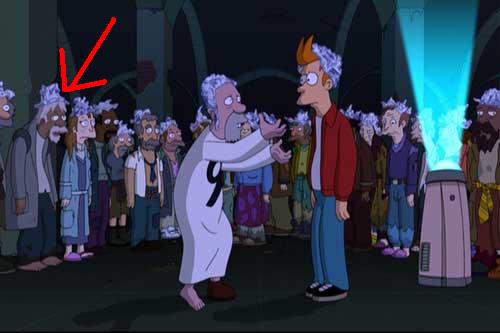 anyone agree that this guy looks like hermes dad or grandad? from the screenshots from new movie--My leg feels funny! 08:50, 11 December 2008 (UTC)

Hardly. Could be anyone. There are no strong resemblance between this man and Hermes. I am not saying it is impossible for him to be, but this is speculative at best. --SvipTalk 13:22, 11 December 2008 (UTC)

In Bendin in the wind, when Fry pulled a bong (the device that let's you speed/slow the passage of time)from under the seat of the VW van, Hermes reacted in shock. In Bender shouldn't be on TV, Dwight found one of his blunts(marijuana rolled into a cigar), saying "That's not a cigar... and it's NOT mine!" Also, at the Olympics, Hermes mentioned the Jamaican team was held up at the airport for certain interests.

His wife also says at Fry's funeral (though technically within a dream sequence) "Can't you go anywhere without lightin' something up?" although in HHRhGB, he says he's going to relax the traditional Jamaican way: A glass of warm milk. They hint quite a bit, but they never come right out and say it. So at best, we could only say that he may or may not own something that resembles but is not a cigar, likes lighting unspecified things up, and relaxes with warm milk. --67.176.104.253 17:57, 23 June 2010 (CEST)