Scruffy is the undead janitor at Planet Express and is the only person working for Planet Express who isn't a primary character. He reads pornography, and believes in his company, as evident by his purchase of 30,000 more shares of Planet Express than the rest of its employees. The other members of staff only see him occasionally, and rarely recognize him when they do. Sometimes he doesn't recognize them either.

Little is known about Scruffy's background, but he has been working at the Planet Express delivery company since at least 2995, when he became employee of the year. It has also been implied that Scruffy died once, as Hermes mentions bringing him back "as a zombie" (6ACV16). In the early years of the 31st century, he also took several other jobs, for example at the Le Spa and as a roadie for the Beastie Boys.

He entered the Panama Wormhole, after helping to rescue his colleagues, along with all the other Planet Express staff members (ItWGY), and was killed and then reborn a short time later (6ACV01).

At the end of "Neutopia", Scruffy was in the bathroom while all other characters were having their genders corrected, but in "Yo Leela Leela" Scruffy appeared as a male.

In a coverage of the Futurama panel at San Diego Comic Con 2011, it was stated that "Scruffy will get a boon as well, becoming a notary next year!"[1] 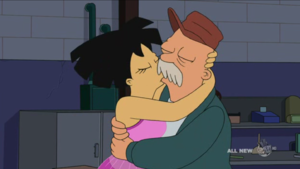 Scruffy and his Wash Bucket (in the body of Amy Wong) in a tender kiss.

Though no-one at Planet Express seemed to know him in year 3000, he and Fry seems to have developed a friendship off-stage. Fry once said that he didn't tell anyone about the location of his seven leaf clover - "not even Scruffy" (3ACV04). Fry is also shown having everyone's phone numbers, but he has two to Scruffy, home and cell (TBWABB)

Scruffy also accompanies the rest of the crew to a Sith-il War Reenactment (6ACV06). For no apparent reason, he was seen cooking Zoidberg on a spit later in the same episode.

In 3010, Scruffy's wash bucket changes bodies with Amy Wong, and confesses her feelings for him. While admitting his own love, he realises that it's wrong, even in a human body, as they are too different - him, a man, and her, janitorial equipment. He ultimately asks her to leave before he changes his mind, and falls back crying to his bed (6ACV10)

Sometime before the events of "Law and Oracle" Scruffy died, and was revived as a zombie. 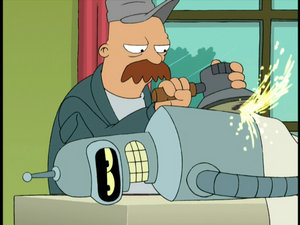 Scruffy was originally just a background character seen working various jobs, and the colour of his hat, hair and mustache often changed between appearances. Writers brought him in on the murder scene of "Anthology of Interest I" because they were running out of non-dead characters at Planet Express, and from there on his permanent role as the janitor of Planet Express was cemented when he was brought back in later episodes without changing jobs.

Hermes: I don't even know who this guy is!

Scruffy: Boy, I've never seen him so down. Or ever before.

Scruffy: Life goes on, but I believe we'll forever carry the pain on the inside.

Scruffy: Scruffy's goin' to get one of them $300 haircuts, this one's lost its pizzazz

Scruffy: [In a deleted scene.] The day of reckoning is nigh... I reckon...
Leela: Wait, who are you again? [Minutes later, Leela walks out the door.] Turns out his name is Scruffy.

Scruffy: Scruffy votes his forty thousand shares for the mysterious stranger.
Leela: Wait a minute, how come you have four times as much share as the rest of us?
Scruffy: Scruffy believes in this company [sniff]

Scruffy: The candle that burns twice as bright burns half as long. Mmhm.

Scruffy: What fevered dream is this that bids to tear this company in twain? [Returns to reading National Pornographic magazine.]

Scruffy: Ms. Wong?
Wash bucket: No, Scruffy, I am wash bucket. I love you. Wash bucket has always loved you. [Kisses Scruffy passionately.]
Scruffy: It's wrong, wash bucket. Oh, it would be sweet for a while, but in the back of our minds we'd know that I'm a man and you're janitorial equipment.
Wash bucket: In another city, we could be anyone we want.
Scruffy: Go. Go now. Before I beg you to stay.
[Wash bucket leaves. Scruffy lays down on his bed, apparently sobbing for a second.]
Scruffy: Yep.

Scruffy: I took a regular board, and made it into a divin' board. Mhrm.

Amy: I've never been sad at a party before. I wonder if my mind is thinking about Kif being in jail.
Scruffy: Jail's not so bad. You can make sangria in the terlet. Course, it's shank or be shanked.
Amy: [crying] Of course.

Scruffy: Life and death are a seamless continuum.

Scruffy: It's a mirror into Scruffy's soul.

Zoidberg: [to Leela] Well, at least Scruffy saved you.
Scruffy: Don't thank me. Thank the ladder.

Scruffy: My job. Toilets 'n boilers, boilers 'n toilets. Plus that one boilin' toilet. Fire me if'n you dare.