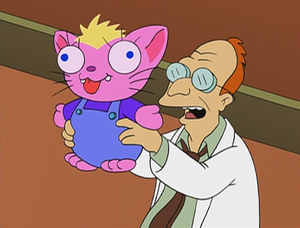 Q.T. McWhiskers is an invention by Professor Farnsworth which is intended to be a cat shaped children's toy which when petted, shoots rainbows from its eyes and says meow. The rainbows emitted are powerful enough to light cigarettes, but do not appear to be dangerous to humans. However, Mom wanted to make it 8 feet tall and replace the rainbows with neutron lasers, which angered Professor Farnsworth, and he dumped her. Mom later made them the way she wanted and used them to rebel with the other robots.