Difference between revisions of "Nazi Germany"

Nazi Germany and the Third Reich (German: Drittes Reich), was an Earthican fascist totalitarian version of Germany in which controlled nearly all aspects of life, It's capital city is Berlin. It was founded in 1933 before the death of Paul von Hindenburg, Former president of the Weimar Republic. Hitler became the dictator of Nazi Party (NSDAP) and officially Germany by merging the powers and offices of the Chancellery and Presidency. It dissolved in 1945, the same year whenWorld War II ended. 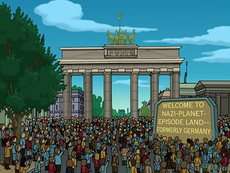