Miscellany of The Beast with a Billion Backs

This article is about the trivia, the quotes, the references, etc. appearing in The Beast with a Billion Backs. It does not, however, include DVD information, character listings and cast information.

Characters in the Date Scene

Leela: Come on Bender, your grandmother could push harder than that.
Bender: No crap. My grandmother was a bulldozer.

Hermes: Professor, sprinkle us with wisdom from your mighty brain. How scared should we be?
Farnsworth: Somewhere between not at all and entirely.
Zoidberg: I call entirely! Ahhhh! Woop woop woop woop!

Colleen: Have you seen how much cotton candy he' [fry] 'can eat?
Farnsworth: Oh my yes, 5.1 pounds. That's why his blood is so good on pancakes.

Fry: Something about seeing it on the Jumbotron makes it so much more real.
Colleen: It's so scary. Well, what are you supposed to do when the whole universe is about to end?
Fry: I have a thought. [Cut to Fry and Colleen in bed.]

Zapp Brannigan: Leela, I can't help but notice that you're unescorted. Might I escort you behind that bush for the next five minutes?
Leela: Nothing would revolt me more.
Zapp Brannigan: Then how about that shrub?

Stephen Hawking: In conclusion, I understand nothing about the anomaly, even after cashing the huge check I got for writing a book about it.

Wernstrom: I have a squad of graduate students willing to risk their lives for a letter of recommendation.
Farnsworth: Your squad sucks bosons. My team is twice as qualified and three times as expendable.
Wernstrom: Tough talk for someone with only one Field's Medal!

Farnsworth: Now stop shilly-shallying and line up for your pre-flight enemas.
Enema-Bot: Warning! The enema you are about to enjoy is extremely hot.

Bender: I finally know what I want to be when I grow up.
Hermes: You want to co-star in his [Calculon's.] TV show, like that time you already did that.
Bender: No, I'm gonna be his stalker.
Leela: That's not really a career, more of a felony.

[Calculon gets into bed, then looks over to see Bender laying down next to him.]
Calculon: Who are you?
Bender: Bender, your biggest fan.
Calculon: Are you going to murder me?
Bender: Unlikely. In my mind, we're friends. This diorama proves it. See? [Presents a diorama of himself and Calculon playing ping pong.]
Calculon: Sir, your derangement is impressive. I'm appointing you my official stalker.

Zapp Brannigan: Kif, stand in that hole so I look taller.

Fry: I can't take it Leela. I need to go away, far away, forever.
Leela: Aw. I know how you feel Fry. There are times when I also feel like you need to go away.

Zapp Brannigan: [about to tell Kif to fire the UUM, Universe to Universe Missile Ready and fi--! [Kif almost hits the launch button, Zapp turns around and laughs.] Almost fooled you there.

Calculon: On every step is a test.
Bender: Ok, but if it's culturally biased I'm suing your ass.

Bender: Do all the tests involve drinking?
Calculon: It never occurred to me before, but yes.
Bender: Wooo, just like Med school.

Leela: The guard operating the x-ray machine came down with a sudden case of broken neck, so I was able to bring you that delicious case you wanted.

Nixon: You again! This better be damned important, I'm right in the middle of a Cosmo survey.

Mayor Poopenmeyer: Look up in the sky!
Hermes: It's a bird!
Hattie McDoogle: It's a plane!
Superman look-alike: I am so out of here!

Zoidberg: Hello? Hello? Call me back on my shell phone [Holds up a conch shell to the side of his head.]

Zapp Brannigan: [voiceover] Captain's log; star date; the year of the Tiger. The battle has been bravely fought, the suffering of our troops beyond measure, but the alien is invulnerable and our defeat inevitable. That much is obvious even from my remote command post here at the Time Square Applebees.

Calculon: ... but the League of Robots hasn't killed anybody in over eight-hundred years, and that was a very sick Girl Scout.

Hermes: Sweet squid of Madrid! The tentacle got Fry!
Leela: Quick, hand me machete! We can still save his legs!

Fry: Thou shall love the tentacle.
Farnsworth: Well, at least we don't have to love each other.

Hermes: It got Zoidberg!
Farnsworth: Oh I never knew how much I'd miss him until he was gone. Not that much as it turns out.

Fry: Thus sayeth the tentacle, "Verily, thou shalt rejoice in the house of the tentacle."
Leela: Fry listen to yourself. You've been brainwashed.
Fry: No, I'm just trying to fit my diction to the importance of what I'm saying.

Leela: No effect. The crystals are bouncing off the tentacle like meatballs off Mothra.

Farnsworth: According to this blinking light the tentacle is made of electro-matter, matter's bad-ass grandma!

Wernstrom: Stop, in the name of love!

Leela: At least I won't have to trim my elbow talons anymore.

Bender: You humans are so cute when you're scared.

Zapp Brannigan: Ditto on the grief there, Amy.
Amy: You miss him too?
Zapp Brannigan: More than you, as his mere wife, could ever understand. He was my fourth lieutenant for God's sake...

Zapp Brannigan: Hardly a month goes by that I don't think of him. [kif]

Zapp Brannigan: Leela, you must try the tentacle. It's like my soul is wearing a velour body glove.

Zapp Brannigan: We loved you, and you turn around and treat us like some sort of woman.

Fry: I don't know is I can put my heart on the line again only to have it broken and stomped on like a nerd's face. 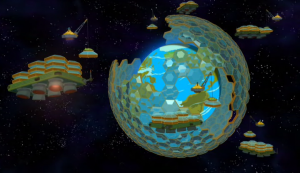 Notice Europe on the left, and the Americas on the right. 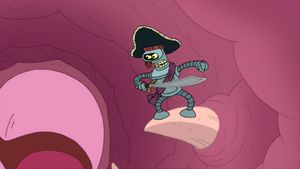