Difference between revisions of "Mark 7-G"

Mark 7-G is a robot accountant who replaces Hermes after he fires himself for being the lowest-rated employee at Planet Express. Mark 7-G is quickly accepted by the rest of the crew, except for Zoidberg, who is angered that they have moved on from Hermes so quickly.

Later, Hermes returns to Planet Express with a robotic harpoon implanted into his chest, and asks Mark 7-G to obtain a box of files from the top shelf of the kitchen. He fails to do so, due to his small arms and lack of legs, plus wide body frame. Hermes successfully retrieves the box down with his harpoon. When Hermes is about to use his hand tools to help obtain the Professor's teeth, which had fallen into the kitchen sink, Bender suggests he should get an extendo-arm implant to be able to perform such tasks. Hermes is initially against the idea, but quickly changes his mind when Mark 7-G suggests he should get the upgrade. 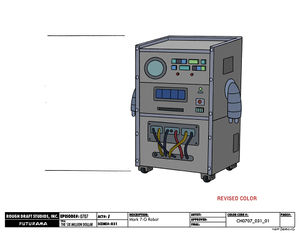 A design of Mark 7-G released by Countdown to Futurama on 9 June 2012.