Difference between revisions of "Liquid Diamond Is Forever!"

This article is about a comic or a subject related to a comic. Its content has been known to be contradicting with an episode of Futurama and is therefore considered non-canon.

After Bender is ejected from Moe's for his interactions with the love testing machine, Homer decides to call it a night as well. Because Bender has nowhere to stay, Homer gives him a place to sleep at Flanders' house. At the retirement home Professor Frink notices that Professor Farnsworth is as smart as him so he breaks Farnsworth out. Bender is caught in the act seducing Flanders' jukebox, and runs from the house. At the country club, Zoidberg enjoys the free buffet, and when Mr Burns begins to choke on a sesame seed he saves the old man by electrocuting him slightly. Burns is so impressed that he hires Zoidberg as his personal physician. The next day Fry, having thought about it while locked in the school, has decided how to prove to Bart that he is telling the truth; he still has the reprint of the comic they are in with him. Bart then points out that he can find the others by looking in the comic. Hermes and Zoidberg get their memories back and Mr. Burns overhears that they are from the future, then has then taken away so he can learn more about their time travelling. In Lisa's room, Leela and Nibbler get their memories back and meet up with Fry, Bart, Bender and Homer. Nibbler explains everything and senses danger at the nuclear power plant.

Using gum from the future, the Simpsons' car is able to fly over the town. However Homer spits it out and they fall onto the Duff blimp, which is lit on fire by Bender's cigar and they continue to drop until Professor Frink’s flying motorbike saves them. Due to the weight, Fry and Lisa have to get out and Fry shows Lisa how to play the holophonor. As everyone else reaches the power plant, Mr Burns reveals that he will drop Zoidberg into radioactive waste if he is not taken to the future with the machine Professor Farnsworth made to escape. As Farnsworth hands it over, Smithers snatches the machine and is revealed to be Amy; she had regained her memory and as a fan of The Simpsons knew Mr. Burns would be at the centre of an evil plot, so she took Smithers' place. Unfortunately, Burns takes it back, and is revealed to be Smithers, who had escaped the ropes he was tied up with. The real Burns is handed the device, but before he can act, the Galactic Time Council, a trio of Rigellians, scare Burns and Smithers away. The Councillors are revealed as holophonor images created by Lisa, with Fry doing the voices. Homer attempts to save Zoidberg, but ends up releasing him into the the waste, which transforms him into a human that the women find him very attractive. The machine is used and it tears the comic. The Brainspawn notice the misgraded comic and Nerdanus XII claims it as a death penalty offence, so the brains shatter the diamond casing. The Planet Express staff escape, but not long after they are not-so-surprised to see Springfeilders causing chaos in New New York 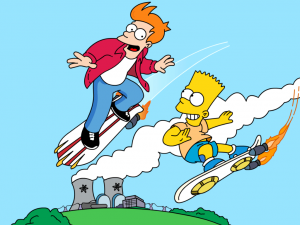 Promo pic for this comic

Zoidberg: This food is mine! Try and take it and I'll kill you! I SWEAR I'LL KILL YOU ALL!
Mr. Burns: I find your use of death threats so refreshing. People claim they're not P.C. anymore!

Professor: Wait a minute! The Galactic Time Council was disbanded eons ago over that sex scandal with a sex planet from the Sex Galaxy.