There are two types of internet: The first type is like the 20th century internet which can be used for downloading pornography and viewing videos which are accessed by saying a single word.

The second type of the internet can be accessed through the net suits. It is still filled with ads which attack people until they give into the demands. Many websites like eBay still carry on strongly, videos can be watched, disguises can be downloaded and games can be played. The virtual representation of the person while online is identical to their normal selves except with a green tinge. 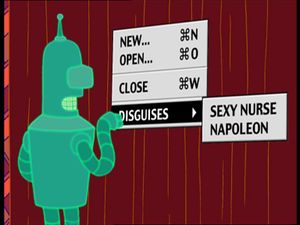 Bender selecting a disguise while Online