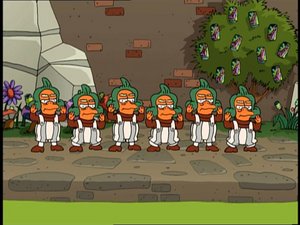 The Grunka Lunkas are small orange men who inhabit the planet Wormulon. They are employed by the Slurm Worms to work in the fake slurm factory. They sing a warning song about the Secret Ingrediant of Slurm. Apparantly they aren't payed to sing so theres no real point to why they are singing the song.