A Fit Worse than Death

From The Infosphere, the Futurama Wiki
Revision as of 04:36, 27 March 2007 by Quolnok (talk | contribs) (A Fag Worse Than Death moved to A Fit Worse Than Death)
(diff) ← Older revision | Latest revision (diff) | Newer revision → (diff)
Jump to: navigation, search 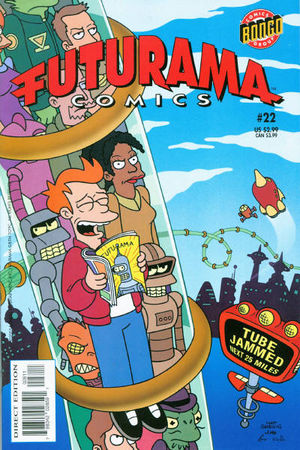 A Fit Worse Than Death

Following the annual company physicals, Hermes fires Clyde, an Anthropomorphised horse, and notes that all staff members have lost at least 20% of their body weight over the year. Bender realises that this is a new way for him to earn money. He begins selling weight loss products and finds one of his first customers in Nixon. Fry is continually late for work due to traffic in the tubes, so Hermes decides to eat his shirt. Later, Nixon makes Bender the "Czar of physical fitness", which allows him to boss anyone around in the name of physical fitness. After Fry is later again, and Hermes eats his outfit, Fry sees the Mayor about the problem and is hired to grease the tubes. Bender forces New New Yorkers to do "callisthenics" at his sweatshop.

After twelve hours the city is allowed to take a rest, but has to return the next day. Fry is particularly worn out, with his three full-time jobs. Fry, Leela and Amy attempt to convince Bender to stop running the sweatshop, and are actually successful. Fry runs out of grease for the tubes and retrieves the fatty foods from the dump to use. People notice the food smells and begin licking the inside of the tubes, making them slower than ever. The Mayor fires him. Because of eating the fat in the tubes everyone is fat again, Nixon fires Bender.