From The Infosphere, the Futurama Wiki
(Redirected from Recurring joke)
Jump to: navigation, search

Running jokes, recurring themes and story arcs are events, references and actions experienced or performed by characters in Futurama that occur in multiple episodes, which may not have any relation besides these things. 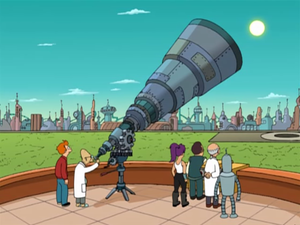 A running joke on Futurama includes a character pointing out a physical impossibility, for example in the Smell-O-Scope, and it being immediately shot down.

Running jokes are similar scenes in unrelated episodes, often the same or similar lines performed by the same or different characters. Examples of this includes catchphrases such as Bite my shiny metal ass, or Amy at any time possible teasing Leela about her general appearance. Another running joke is a character pointing out a physical impossibility, for example in one of the Professor's inventions, and it being immediately shot down. 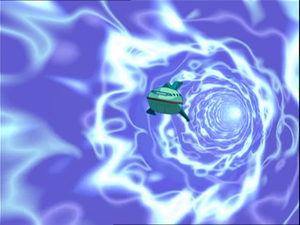 Time travel appears as a recurring theme in episodes such as "Roswell that Ends Well", "Bender's Big Score" and "The Late Philip J. Fry".

Recurring themes differ from running jokes in that they are not necessary jokes or meant for comic relief. This includes the many relationships and character conflicts in the Futurama universe that stay basically the same from episode to episode, without evolution, for example the Farnsworth-Wernstrom conflict or the Mom-Farnsworth relationship. Another recurring theme is a relatively rare element used in several episodes, such as time travel. These episodes often include references to each other, but tell otherwise unrelated stories. 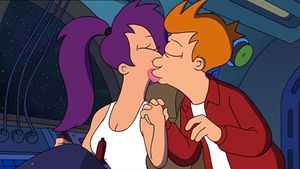 The Fry-Leela relationship is one of Futurama's bigger story arcs.

The difference between recurring themes and story arcs (or overall plot-lines) is that a story arc advances with the series, and it may lay in the background in multiple episodes as well as showing more clearly in others. A good example of this is the Fry-Leela relationship, which starts early in the series and advances from a light crush on Fry's part into deep love to the degree that he risks his life saving her in "Rebirth", as well as including Leela's feelings in "Into the Wild Green Yonder" and episodes such as "The Late Philip J. Fry". A story arc can also show up in only a few episodes and not be mentioned in others, such as the Nibblonian arc or Fry's origins. The main difference between story arcs and recurring themes is basically that a story arc only works if the series is viewed in order, while recurring themes basically reset to the status quo in the end of each episode - Mom and the Professor still hate each other in the end of "Mother's Day", but Fry and Leela's kiss in the end of "Into the Wild Green Yonder" can not easily be ignored.