From The Infosphere, the Futurama Wiki
(Redirected from Record-Your-Own-Message Card)
Jump to: navigation, search

The record-your-own-message card is used to congratulate people on anniversaries (birthdays, wedding anniversaries, etc) or simply greet them. Fry bought Leela a card for her birthday in 3010. The card has a small camera that allows the user to record the message and usually turns on automatically.

By 3050, the record-your-own-message card was somehow improved (or has become obsolete), as Leela considers the one Fry bought her in 3010 to be "old". 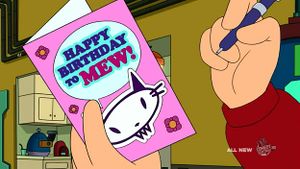 Fry: I just have to sign Leela's birthday card. How do you spell "XO"?
Amy: Guh! It's a record-your-own-message card. You don't sign it. You leave a nude video greeting.
Fry: Does it have to be nude?
Amy: I guess not. That never occurred to me.