On 17 July, 2009, 20th Century Fox Television announced it would hold open auditions to recast the characters for Futurama's upcoming sixth production season[1][2] when they failed to meet the salary demands of the voice actors. This announcement outraged the fans and lead to much speculation.[3]

When Futurama was officially revived for its sixth production season, it was assumed that the voice actors of the show were also expected to return and that a contract had already been signed.

Before 20th Century Fox Television's official statement, Phil LaMarr posted about an audition call for some of the main characters on Futurama as well as Kif Kroker and Zapp Brannigan. The call also included links to videos of characters so actors could get an impression of the voice. News of this call was later broken by Forces of Geek.[1]

Moments later, the story was confirmed by 20th Century Fox Television in a statement:[2]

Maurice LaMarche and John DiMaggio later confirmed the story on their Facebook pages.[7]

The immediate fan reaction to the news was anger and scepticism. Fans quickly predicted that the whole thing was merely a negotiation ploy by 20th Century Fox Television to force the voice actors to cave in and sign up to work for a lower salary.[4][8][9] Immediate reactions elsewhere included speculation of it being a publicity stunt to stir up more talk about Futurama.[10]

In addition, Variety reported that the actors had asked for 75,000 dollars per episode in salary demands.[2] However, at the time, it was neither confirmed by 20th Century Fox Television nor the voice actor's reps.[11] This claim was later disputed by Phil LaMarr on his Facebook page.

Despite the two more obvious versions, other theories started appearing to explain the whole ordeal. Although, after the Comic-Con panel, people are confident that it was a negotiation tactic more than anything else.[12]

Some fans suggested that it was a Union requirement to recast actors for a returning show. However, this was quickly rebutted with references to how neither Family Guy nor Futurama itself had to be recast when they returned.

Perhaps the most popular theory; fans speculated that the whole ordeal was put together by 20th Century Fox Television as well as the show's runners and voice actors to stir up more publicity for Futurama. The theory held up until the 2009 San Diego Comic-Con, where supposedly the truth would be revealed.[13]

After the cast was dis-invited,[4][14] popularity of the publicity stunt theory diminished as it would be improper for 20th Century Fox Television to dis-invite its cast as part of a stunt. However, John DiMaggio's singing in an interview[15] regarding the negotiation, a day prior to the 2009 San Diego Comic-Con panel, seemed odd considering that he was dealing with a negotiation for one of his favourite jobs. Though, some dismissed this as DiMaggio being confident that the cast would return.[16]

However, with no presence of the Futurama cast at the 2009 San Diego Comic-Con, this theory was finally put to rest.

When the news broke, the Futurama fan base quickly mobilised. Several of the sites reporting on the news advised its readers to sign petitions,[4] send e-mails to 20th Century Fox Television executives[4] or the casting director, Scott Muller,[1] and/or join Facebook groups[4] to voice their discontent with the decision.

With the extensive uproar from the fan base, the cast members responded with much appeasing of the fan base. Billy West personally thanked his readers on his forum.[17][18] John DiMaggio applauded the support in his IGN TV interview.[15]Also, Maurice LaMarche and Phil LaMarr expressed their gratitude on their respective Facebook pages[4] and through a video.[19]

The fan base is not the only group to express their opinions. Adult Swim responded with a small piece on their channel regarding the recasting ploy, saying that if Fox did it their way, the show would fail again, and when they gave it back to Adult Swim, they would do it right again.[20][21]

A Futurama panel was scheduled for the 2009 San Diego Comic-Con on 25 July, 2009 [22] that would feature the show runners, Matt Groening and David X. Cohen, voice actors John DiMaggio, Billy West, Katey Sagal and Maurice LaMarche were also scheduled to be there. However, on 22 July, 20th Century Fox Television dis-invited the voice actors from participation in the panel.[14] 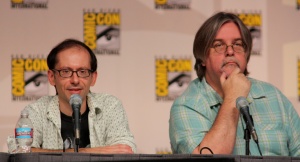 The panel began without the actors present, and an announcement by the Hypnotoad told people to ignore the lack of their presence.[23] Cohen and Groening then walked up on stage to explain that they were very concerned about the situation and hoped it would be sorted out soon, but could not speak on the negotiation matter.[23] In addition, the audience was asked not to ask questions about the dispute.[12]

Producer Claudia Katz and writers Patric M. Verrone, Eric Kaplan and Michael Rowe were also present at the panel.[24] While the panel itself revealed little new information about the situation except for Cohen's and Groening's support for the voice actors and some plot points coming up in the new season, the structure of the panel did put an end to the publicity stunt theories, which would have required some sort of announcement at the panel by 20th Century Fox Television.

After the Comic-Con panel finished, many fans had a sense of uncertainty due to the lack of information on the matter[12] and some people were concerned about the possible outcome of the ploy.[12]

The comment was clear though. If the cast did not return, then there would be no new Futurama at all.[26] However, the later statement released by Matt Groening and David X. Cohen[3][6] seemed to hint that production had stopped with their comment: "[t]he call has already gone out to the animators to put the mouths back on the characters".

David X. Cohen and Matt Groening personally responded to all the fans who participated in the e-mail campaign against the recasting ploy later August 2009.[27]

Reports say that 20th Century Fox Television agreed to a pay more than they originally offered, while the actors agreed to accept less than they originally wanted.[3] The actors asked in the final negotiations for 40,000 dollars per episode,[28] but it seems they have settled for less than that in the end.[29] Where the original figure of 75,000 dollars per episode came from remains disputed.[30]

According to Katey Sagal, the voice actors originally asked for more than they were usually paid, as she put "season 6 payment", and the production studio did not originally offer that.[31]

When the main cast settled with 20th Century Fox Television, the supporting cast, consisting of Lauren Tom, Phil LaMarr, Frank Welker and David Herman, were not settled. The following week on 3 August, they began negotiation.[4] By 7 August, the negotiations with the supporting cast were settled, and all the actors are back on board with the Futurama production team, [4] which is appropriate as the first table read for season 6 started on the very same day.[4]