From The Infosphere, the Futurama Wiki
(Redirected from NNYPD)
Jump to: navigation, search

The New New York Police Department is the police department of the city of New New York, whose main goal is to protect people and to keep peace. The two main officers are Smitty and URL who are often seen together. Colleen was the chief of police during a brief time in 3008, before she decided to stay in Yivo's universe and the only pathway was sealed. Their main weapon is a solid lightsaber.

The Department has also been featured in the documentary television series Cop Department that follows police officers. 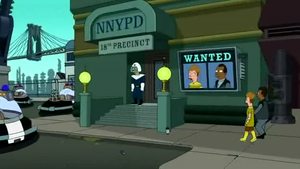 This list includes appearances of officers or media which adds new information.