From The Infosphere, the Futurama Wiki
(Redirected from Dr. FlimFlam's Miracle Cream)
Jump to: navigation, search

Dr. FlimFlam's miracle cream was obtained by Dr. Zoidberg on an interstellar trip from a sleazy travelling salesman who sold him one tube of the mysterious substance for no less than sixty dollars. The lobster doctor gave it to Fry and Leela as a cure for their sore limbs after assembling a super collider, and both of them found out that the substance caused superpowers in humans as a side-effect. Common powers found in humans after the use of the cream are: 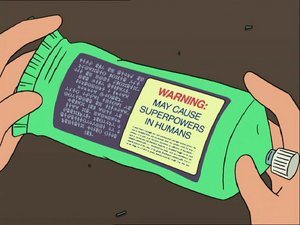 The back of the tube with the side-effect warning

Apart from the last item (Zoidberg doesn't react to their calls), both Fry and Leela enjoy these superpowers for a limited amount of time, after which they need to reapply the cream to keep them. Together with Bender they form a team of superheroes, the New Justice Team, and do heroic things all across New New York. After they run out of cream though, the superhero team soon falls apart.