Cyclophages, or cyclops eaters, are an endangered species which lived in the Cyclophage Preserve and whose only source of prey was cyclopes. [6ACV01] According to Leela's wishes, if she ever went into a permanent coma, she wanted to be sacrificed to a cyclophage. While the Planet Express crew was there fulfilling her wish, Bender's obnoxious partying woke her up during the ceremony.

The crew then escaped from the cyclophage, back to Earth where the monster was thought dealt with for a while, only to appear when Bender refused to dance any longer to burn off his energy. As his cabinet started boiling, one of his eyes fell out and the cyclops eater's attention was drawn on Bender for a taste of a robot cyclops. Unfortunately for the monster, Bender exploded in its neck, killing the monster and relieving Bender of having to party to burn off energy. 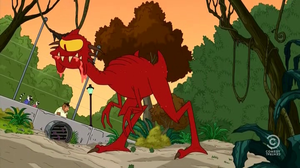