From The Infosphere, the Futurama Wiki
(Redirected from Bubblegum)
Jump to navigation Jump to search

Along with his team, Bubblegum joined forces with Professor Farnsworth and the Planet Express crew on numerous occasions. The Globetrotters helped the Professor figure out how to stop time skips [3ACV14] and better understand the time travel pradoxicality equation, [BBS] having fought for Earth in the battle with the Scammer Aliens, [BBS] solved a math problem that would allow him and his employees to return to their original bodies, [6ACV10] and helped Amy restart the Earth's rotation after the Thubanians had stopped it. [6ACV08]

Additionally, Ethan Tate was a judge on the TV show Iron Cook, [3ACV22] witnessed the robbing of the Quantum Gemerald from the Museum of Natural History by the New Justice Team, [4ACV04] went out on a date with Yivo, a planet-sized alien, [TBwaBB] attended the implosion of the violet dwarf star ceremony, [ItWGY] as well as the 100th Delivery Party, [6ACV12] and celebrated a non-canonical Kwanzaa 3010 with the Conrad family in their apartment. [6ACV13] 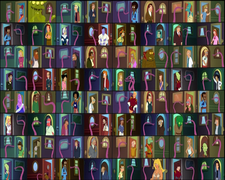 Among Yivo's 64 dates [TBwaBB] (third picture on the fifth line).

Bubblegum: Even in these formal shorts I feel like a failure.

The Professor: You're that Bubblegum Tate?
Bubblegum: Well, I sure ain't his Grandma.

Bubblegum: Uh-oh. Time to boogie on down to the sauna!