For other uses, see Bongo (disambiguation).

Bongo is a one-eared rabbit. While at Joe's Ark Pet Store on X-mas Eve, looking for a pet for Turanga Leela, Philip J. Fry saw him in a cage among the other animals for sale. On a later X-mas, Santa Claus' aides made toys resembling him.

When the rabbit creatures invaded New New York, Bongo and another rabbit, Binky, were among the creatures, writing on the wall "Crossovers are hell".Disputed canon

In 3017, the universe was pulled into hypnowaves after the Hypnotoad summoned the female hypnotoad from a perpendicular universe. After New New York was reconstructed, Bongo was still at Joe's Ark Pet Store, among the pets that the Planet Express crew could purchase for Dr. Amy Wong.Disputed canon 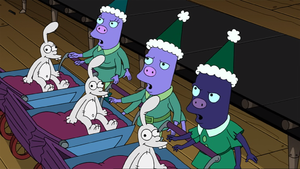